Happy 2014! It has been a while since my last post, which is largely because I have been in Hong Kong for most of December to work on some joint research with Prof Donggen Wang on well-being and to attend two conferences. I gave a plenary during the 18th Conference of the Hong Kong Society for Transportation Studies on the insights that can be derived from Whitehead’s philosophy for the analysis of processes of change in transport (see picture). 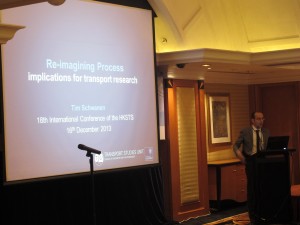 And on the day prior to the main conference I gave a keynote on how I believe activity analysis in transport studies should be reconfigured so that we can better understand how socio-technical innovations in urban transport (e.g. car sharing schemes or electric vehicles) change, develop and diffuse over time in particular places. I will probably discuss this work in a later post.

Apart from working and attending conferences, I have also had the opportunity to experience the fantastic city that is Hong Kong — a paradise for urban geographers interested in processes of urban expansion, growing sociospatial inequality and low carbon urban mobility. I visited Hong Kong in 1998, just after the hand-over, but the city has changed almost unrecognisably since: it has grown in terms of population size, ‘neoliberal’ urban (re)development projects are now much more common, social inequalities have increased markedly, and the city has become much more Chinese than it was in my memory. It has not, however, lost any of its positive energy. If anything, its vitality has only increased and easily surpasses that of Europe’s major cities. It is now truly a global city where East and West mingle in all kinds of innovative and inspiring ways!